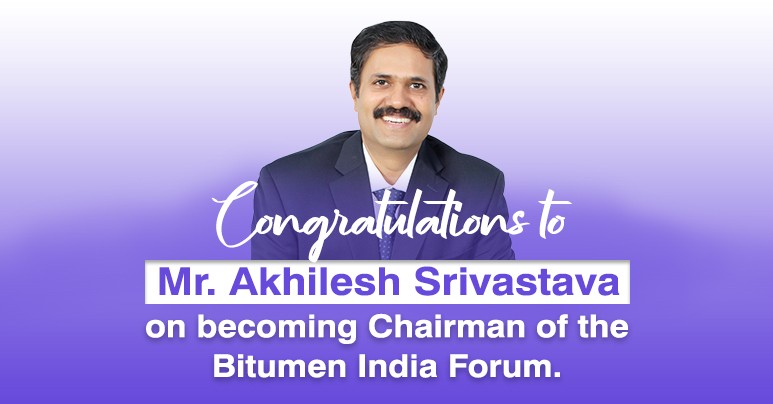 Congratulations to Mr. Akhilesh Srivastava on becoming Chairman of the Bitumen India Forum.


How true it is getting for India!


The Centre for Economics and Business Research (CEBR), a London-based consultancy, predicted that India will be a USD 10 trillion economy by 2035 and the third-largest economic power by 2030. However, many expect it may be achieved earlier due to a likely higher growth rate than the study indicated. One of the reasons for this outstanding growth is the phenomenal growth in Infrastructure, especially Roads & highways.


Mr Akhilesh Srivastava, Ex-NHAI and Road Safety Ambassador of the International Road Federation(IC), WEF and many international/national organisations, have been appointed as the Chairman of the Bitumen Indian Forum by the members. Mr Akhilesh Srivastava is a globally known digital technology leader with vast experience in successfully implementing many e-Governance programs in India, including FASTag. His recently launched technology-based next-gen Road Safety 2.0 initiative, which encourages the adoption of technology in road safety to compensate for human and engineering limitations, is a highly successful model in India.


The infrastructure development programs initiated by the Government of India, such as the Bharatmala project, Golden quadrangle project, construction of various industrial and economic corridors like the Delhi-Mumbai Industrial Corridor, Bengaluru-Mumbai Economic Corridor, Chennai-Bengaluru Economic Corridor, Vizag-Chennai Industrial Corridor, and Amritsar-Kolkata Industrial Corridor for the construction of highways and express ways drive the demand for Bitumen to unprecedented levels. In addition, the Government initiatives such as Pradhan Mantri Gram Sadak Yojana,which includes the provision of good all-weather road connectivity to unconnected villages of the country are driving market growth further.


Moreover, bitumen is widely used to waterproof the roof of the building. Therefore, government initiatives such as the “Smart City Mission” and Pradhan Mantri Awas Yojana (PMAY), including building houses in urban and rural areas, boost the Bitumen market growth. The significant development in the Indian construction industry and industrial development across the country will drive the growth of the bitumen industry in the coming years.


According to a report published by Allied Market Research, the Indian Bitumen market is projected to cross Rs 50,000 Crores by 2026 and add allied services such as transportation, storage, testing and quality checks etc., the market size of Bitumen will be much more significant.


However, growing health & environmental concerns over the production and usage of bitumen, human health & environmental issues associated with bitumen, unsettled crude oil prices, and a rise in the use of an alternative for bitumen are expected to restrain the growth of the market too. Moreover, the development of bio-based bitumen and EME (Enrobés á Module Elevé) binder is expected to provide growth opportunities for the Indian bitumen market in the near future.


While talking to the correspondents, Mr Akhilesh Srivastava said that his primary focus would be ensuring the availability of the best quality Bitumen for infra development. For this, he would work with Manufacturers, Oil PSUs, Customers, Importers, Traders, Transporters, Road Developers, Government and Regulatory bodies and other stakeholders in the ecosystem to develop the best practices and a cohesive environment.


His other priorities will include enhancing the reputation & awareness of the Bitumen Industry, identifying the problems of the Industry and bringing them to the knowledge of people who can solve them.


He said the Forum would serve as a facilitator for Innovations in the Bitumen Industry, bringing the best global technologies and practices to India and vice-versa. The Forum should be a knowledge-sharing platform for any Bitumen-related topics, research & innovations and update the industry with upcoming trends. He expressed his concern for the environment andsaid he would encourage innovation in Green Bitumen.


Being a reputed Road Safety leader, Mr Akhilesh Srivastava said he would focus on improving the safety of Bitumen Industry workers by training and skilling them with the best industry practices.

Get In Touch With Us